Denim is a strong, medium-weight, single-cloth fabric, weighing from 4% to 5 ounces per yard and composed of single cotton yarn in warp and filling. It is usually made with a small, uneven-sided twill weave, such as I— 45° twill, and in solid color warp effects, generally indigo blue or dart brown, and white filling. White selvedge is used in all grades. A grade known as covert cloth is made of twist yarn in the warp, and dark colored, single filling. The twist yarns are usuallly blue and white and the cloth of a similar texture to that of the regular denim. In effect denim is a stout, twilled fabric, having excellent wearing qualities, and is made to sell at 10c. to 15c. per yard, retail. It is used principally in the manufacture of overalls, to be worn by workmen who operate machinery, or by those who perform hard, rough labor of any description. Denim cam be woven in any singie box Toller loom, such as Mason, Lowell, Lewiston, Colvin, etc., the warp being prepared on the slasher, in the same manner as a sheeting warp. It is cnen drawn in on the harness or hoddles, in accordance with weave desired. The finish of this fabric is a rather heavy sizing, after which the goods are dried and pressed. Denim is sometimes dyed in the piece, in light shades of tan, blue, etc., and the goods made up into summer outing skirts for ladies' wear.

Carding and Spinning Particulars. Denim is constructed of yarns that are made in either the first or second divisions of mills as given in a previous lesson. In the second divison of mills the raw stock would be run through a bale breaker, as this class of mills would undoubtedly contain this machine in their equipment. In the first division of mills the mixing would be done by hand. When bale breakers are used, it is of great advantage to have a blower in connection with them. This Mower is generally placed at the delivery end of the machine and blows the cotton, after it has passed through the bale breaker, through trunking onto an endless lattice which deposits it in the mixing bins. 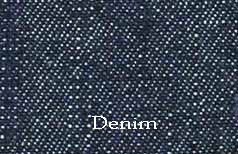 A blower is of advantage because it opens the cotton and the current of air helps to dye it and the cotton does not have to dry out in the mixing bins as is the case when a blower is not used. Mixing is a very important part of the card room and too little attention is generally given to it. It will be understood that if the cotton is not properly mixed, this defect cannot be remedied at any subsequent machine.

Cotton of the same length of staple should always be used, cotton of the same nature, and where waste is used the percentage should be as small as it is possible to make it. The same mixing may be used for making of both the warp and filling yarns, a medium to low grade being used of a staple length of about one inch (ranging from % to 1% inches, according to the quality of denim being made). A small percentage of comber waste may be used, but is not advisable. The good sliver waste from the cards and drawing frames is mixed with the paw stock and the roving waste is mixed in the manner described in a previous article. The cotton would be put through two processes of picking and an opener. Keep the hopper of the opener well filled with cotton so that the lifting apron will always be carrying up a full load of cotton to. the pin roller.

being about 260 pounds per delivery per day of 10 hours. When metallic rolls are used, the production would be considerably greater or about 350 under the conditions noted above. Metallic rolls are coming more and more into use, especially on the lower counts ot yarns, and also on a heavy Sliver; although they can be used on all grades and lengths of staple, they are mot generally used, but not through any fault of the rolls, as they are suitable for producing fine work. The ©lubber draws the sliver into .55 hank and the one-process fly frames used makes the roving into a 1.75 hank roving. Sometimes two different hanks are made at the fly frame, one for the warp and one for the filling yarns; where this is the case, the warp yarn is made from one hank roving and the filling from 2.00 hank. The particulars for the warp spinning frame for No. 9s are as follows: Front roll, one in. diameter; gauge of frame, 3 in.; diameter of ring, 2% in.; length of traverse, 7 in.; for a filling frame making 16s use gauge of frame, 2% in.; diameter of ring, 1% in.; length of traverse, 6*4 in. The warp yarn is then spooled, warped and put through the slasher.