Incorrectly called Manilla hemp. Fibre commonly used in the Philippines. Fibres are tied end to end and woven without spinning. The Abaca plant belongs to the family of the banana plant and is indigenous to the Philippines. Abaca fibers are strong, durable, resistant to salt water and cheap to produce. This is a real eco-friendly fiber. See the following LINK

Fibre or cloth with natural oil or wax removed chemically. Because of absorbent nature, used for surgical purposes.

Very fine muslin of cotton imported from India at the end of the 17th century.

Originally made of linen for airplane wings. Close even texture. Since the war made of cotton in different weights and colors. Used chiefly in shirts. Weave plain.

(alaca) "Originally a striped clothe of mixed cotton-and-silk, commonly red and white or blue and white. Gujurat Alachas usually contained a higher proportion of cotton than Bengal cloth of the same name which someone led to their being classified as calicoes.... Alachas made on the Coromandel coast were similary stripes but made entirely of cotton."

This, the most elaborate needle-point lace which has ever been produced in France, was first made in about 1665

"Algerian stripes is manufactured in alternate stripes of rough knotted cotton web, and one of a delicate gauze-like character,composed of silk. It is employed for the making of women's burnouses, in imitation of those worn by the arabs. It used to be proudeced in scarlet and cream-white." S. F. Caulfield, Blanche C. Saward The Dictionary of Needlework

Cotton cloth produced in Benin, Africa, woven on either the vertical loom or the treadle loom. 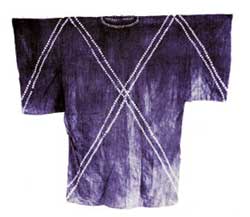 Fine cloth of mixed cotton and silk imported from India by the East India Company in the XVIIth c.

Cloth of double twill weave running diagonally from left to right. Originally made in black for mourning wear.

1. An animal somewhat like the Angora goat, but smaller, native to South America. 2. Name of a fabric originally made of this fibre. Similar to brilliantine and mohair. Smooth, wiry with cotton warp and worsted filling (alpaca, mohair or any lustrous wool slightly twisted). Wears well, sheds dust. Uses: linings, men's summer suits and office coats, women's dresses (when in vogue). . Rayon and cotton fabric called alpaca because of its wiry nature. 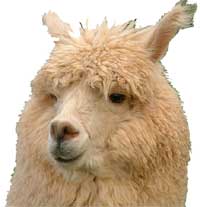 The English East India Company established a textile factory in Patna for trading in calico and silk. Amberty or ambertee was woven there.

A kind of fabric with fancy pattern originally made in Amiens, France.

Wool fabric first manufactured in the Flemish town of that name. Maurepas , 1743

A fabric made of wool and silk mixed, sometimes of mohair and cotton at the end of the 17th century.

Raw silk fiber of Persia. Ardasse was used sometimes in Lyon in the early 18th century.

The needle-point lace made at Argentan is the only needle-point lace with a net ground besides Alencon which has ever been made in France. It is probable that factories at both places were established in the reign of Louis XIV. by Colbert, but its name does not appear in the ordinance.

A kind of silk taffeta made in Lyon in the 17th and 18th century. The name is derived from the French Armoisin. It is a strong make of thick plain black corded silk, a kind of taffeta, employed for scholastic gowns.

Lace made in the north of France in Arras

Distinguished from regular bed ticking by its printed design. Often a floral pattern in a stripe. A tough firm cloth. Uses: mattresses and pillow covers, sometimes as cretonne. Weave—Satin or twill.  Width, 36".

A substitute for leather made by coating a cotton fabric with a nitro-cellulose preparation and embossing the surface to imitate leather. Various effects produced by kind of fabric foundation and the color and finish of surface. A good grade of manufactured leather is more durable than a poor grade of split leather.    Sold under trade names as Pantasote, Leatkerwove, Fabrikoid, Zapon, etc. Uses: upholstering, suit cases, millinery and dress trimmings.

From Assissi in Italy. Embroidery in which the designs themselves are left unworked and stand out in white from a solid background worked in cross_stitches. Traditionally, Assisi embroidery was rarely executed in cross-stitch, but most often in long-armed cross-stitch.

Type of silk used in Turkey in the 16th c. Atlas was commonly used as facing on kaftans. In "Textile in America" Atlas is a silk-sattin manufactured in the East Indies.

(Fr. pr. o-bus-sone). Carpet or Tapestry made in Aubusson, France on hand looms.    Aubusson is situated , in the upper valley of the Creuse River in central France. The first Aubusson were produced by Flemish weavers who left Flanders in the second half of the 16th c. 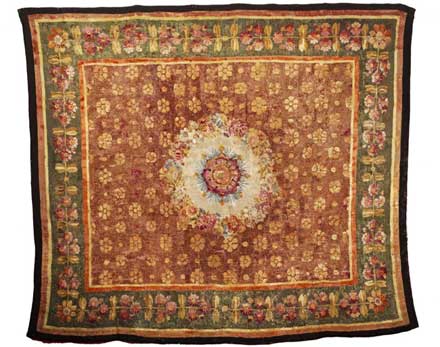 Pile carpet named for town in England where first made. The manufactory was established by Thomas Whitty in 1755. In 1835 the manufactoey was moved to Wilton.

"Whitty was impressed by a large Turkish carpet he saw at Cheapside Market in London and upon his return to Axminster he used his skills as a weaver to work out how to produce a product of similar quality and after several months work he completed his first carpet on midsummer's day. His carpets were then chosen by wealthy aristocrats to have in their English country homes and town houses. Axminster Carpets were produced for the music room of the Brighton Royal Pavilion, Saltram House, Warwick Castle, Chatsworth House and in 1800 for the Sultan of Turkey. King George III and Queen Charlotte purchased Axminster carpets and also visited the factory which dominated the English carpet market between 1755 and 1835 when Samuel Rampson Whitty, the grandson of the founder was declared bankrupt following a disastrous fire seven years earlier which destroyed the weaving looms. Blackmores of Wilton, near Salisbury, bought the remaining stock and looms and extended their business to include hand-knotted carpets which were still called Axminsters." REF : Peter Long (2005). The Hidden Places of Devon. Travel Publishing Ltd

A variety of weaves and textures made from long staple cotton for tires. Treated with rubber and vulcanized.

Duck woven with stripes (yarn dyed) for awnings and lawn umbrellas. May be used for couch covers and chair seats. Awning stripe be yarn dyed or printed. 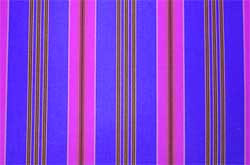