AUSTRIA has been long famous for its Linens, but it has never exported either yarn or Linens largely, the manufacture hitherto importation of these articles from other countries have been almost prohibitory, and comparatively few foreign Linens have found their way thither. Both the exports and imports of Linens have therefore been almost at zero hitherto The quantity of Linen yarn imported is also much smaller than might have been expected, considering the extent of the population of the country, and that many of them are a Linen wearing people. Details of the imports and exports are given below. Austrian Flanders was among the first countries which, after the dark ages, began the manufacture of Linens in Western Europe. Austrian Hainault and Brabant were also famous for their Linen manufactures at an early period, the city of Louvain alone having, in the 14th century, employed 150,000 weavers in its Linen and woollen manufactures. These countries are not now numbered among the dominions of Austria. 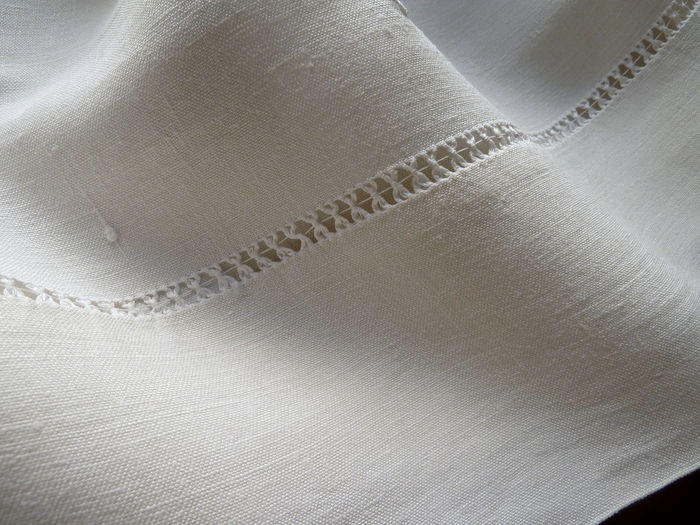 In 1764, Vienna exported Linens, probably by the Danube and also through Trieste. Among the exports from the latter port in the present time are enumerated Hemp, Linen manufactures, and Linen bags. Hemp is grown largely, and of good quality, in Hungary, Transylvania. Flax is cultivated largely in many districts of Austria, and in some of them to a very great extent The quantity of Flax and Hemp grown in the Austrian Empire in 1854 was 146,090 tons; in 1859,147,840 tons, and it is computed that the quantity has since increased to about 150,000 tons. The quantity of linseed and hempseed raised in 1854 was 5,372,680 bushels; and in 1859, 3,886,200 bushels. Mr Fane, Her Majesty's Secretary of the Embassy at Vienna, in his report, dated 31st December 1862, says:—" A great part of the manufacturing industry of Austria has been created by artificial means, and is only maintained by high protective duties, and thus the community pay heavily for the benefit of the limited class of manufacturers." It would thus appear that the Linen manufacture of Austria is not in a healthy position. The Government desires that Austria should be dependent on itself alone for its textile fabrics, and, while governed by such a spirit, neither an export nor an import trade of any extent need be looked for. Such a doctrine may do in an absolute country like Austria, but it is contrary to the spirit of the age, and with people living under such a law great progress is an impossibility, as fair competition only will stimulate to first-rate excellence in any branch of manufacture. The Linen manufactures of Austria are not confined to any one province of that great empire, but they are established throughout nearly all of them. Kreusberg of Prague says, that in 1835 about 280,000 persons were employed in the Linen manufacture, including those in regular factories, as well as those in farm houses partially employed in husbandry, but probably the number now very considerably exceeds this, as the trade has been on the increase. There are yet few large Linen spinning or weaving establishments by power in the Austrian Empire, but no doubt the manufacturers of that country, as they have hitherto done, will endeavour to keep pace with other nations, and extend with the wants of the trade. In Austrian Silesia, there are spinning mills at Freudenthal, Engelsberg, and Schbnlinde; and the first two places also make excellent Linens. Several towns in Bohemia have spinning-mills and Linen weaving establishments, such as Hohenelbe, Marklow, Garten, Bumburg, Nachod, Liebenau. Linens are also made at Liebau, Sternberg, in Moravia, in Vienna, and in many other places of the Austrian Empire, and, from the great quantity of Flax grown, the total Linen manufactures of the country must be very large, and of the value of more than ten millions sterling per annum. Comparatively few of the Linens made in Austria are exported, their domestic consumption must therefore be enormous. A large proportion of the Linen manufacture of Austria is still carried on in the primitive method common to Scotland last century. The Flax is grown by small farmers, spun on the common hand wheel by their wives and daughters during the winter, and woven in the houses of the peasants, partly by those who follow weaving as a trade, but chiefly by hinds when not engaged in field work.

In 1850 there were 1500 Flax spinning mills and manufactories in Austria, some of them of large and others of small size, and since then they have been largely increased, both in number and extent. Some excellent specimens of Austrian Linen were shown in the Great Exhibition of 1862, and the following short report, written after an inspection of the goods, conveys some idea of the attainments of the Linen manufacturers in Austria at that period. From various causes Great Britain has little to fear from the competition of that Empire ; still, even the most advanced of the manufacturers of Leeds, Belfast, or Dundee, may learn something from the study of Austrian Linens. " A considerable quantity of Flax yarn and Linens, spun and manufactured chiefly in Bohemia and Silesia, are shown in the Exhibition. The yarns are exhibited in the natural, bleached, and dyed states. Some of the specimens are admirably spun, and would do no discredit to the mills of Dundee, Leeds, or Belfast. The art of bleaching and dyeing is well known in Bohemia and Silesia, the colours produced being first-class. The Linens comprise sheetings, fine shirtings, diapers, damasks and various other fabrics. They are manufactured with much aire, the cloth being well driven up and uniform throughout, and the selvages neatly formed. Some of the goods are of common quality, and some of them of great fineness. The bleaching and finish of the finer goods are highly commendable, and contrast very favourably with similar goods made in this country. Some beautiful damask curtains and table Linens are shown, of very rich and lovely designs, and of most superior quality. The Linens exhibited in the Austrian department are possessed of much excellence, and do great honour to the various houses producing them, as well as to the sections of that empire in which they are made."