AFTER the separation of Belgium and Holland in 1831, the government of the former kingdom paid great attention to the manufactures of the country. The cultivation of Flax received much encouragement, and large quantities have long been regularly grown in both East and "West Flanders, and in other provinces in the kingdom ; The quality of the Flax raised is highly extolled, and it commands a comparatively high price in all countries. Large quantities of the Flax grown is consumed at home, but it is also exported extensively to the United Kingdom, France, and other countries. From time immemorial the Flemings have been famous for their mode of cultivating, preparing, and dressing Flax, which is not surpassed, if indeed equalled, in any other country.

Some account of the various processes employed there having already been given in the chapter on Flax culture, it is unnecessary to say more on the subject here. The farmers who grow the Flax have generally small holdings, and much of the work connected with its preparation is performed by the members of their own family. They also spin and weave a sufficient quantify of it for domestic wear, and sometimes also for sale in the home market. In addition to the quantity thus produced, there are large establishments for the spinning and weaving of Linens in various parts of the country. 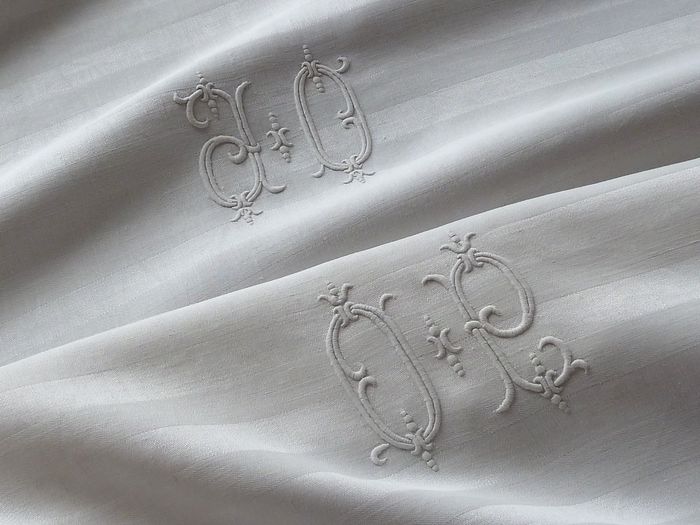 The chief seats of the plain Linen manufactures are Ghent, Oudenarde, Benaix, Grammont, Lokeron, and Alost, in East Flanders; Thielt and Boulers, in West Flanders; Matines, and Turnhout, in Antwerp, and Ath in Hainault. Courtrai, Brussels, and Bruges, are celebrated for lace, thread, ticking, and checks, Ac. The machinery for the spinning and weaving factories in Belgium is of the best construction, and with all the recent improvements, a great part of it having been supplied by the best makers in Leeds and other towns in this kingdom. At one period large quantities of the yarn spun was exported to France, but the high duties charged by France nearly put a stop to the trade. The recent alterations in the French tariff will no doubt again open the door to the Belgium spinners, and enable them to send part of their surplus production thither. Considerable quantities of Belgian yarn are annually exported to this country, and used in some of the manufactures of Leeds and Belfast. Belgium also imports a good deal of Linen yarn from the United Kingdom, part of which is used in her manufactures, and part sent on to Germany.

The quantity of Linen manufactured annually in Belgium, exclusive of what is made in the houses and worn by the fanners of F landers, was stated to amount to about 750,000 pieces in 1840. Since then the production has increased very largely, and the increase would appear to be progressive. According to French official accounts the value of the imports from Belgium of the following articles entered for consumption in 1839 was—Flax, £24,997; Linen yarn, £89,689; Linen, £440,915; lace of Linen thread, £91,393; linseed, £136,623; total, £783,617; besides articles of same class introduced by contraband.

The process of bleaching

The process of bleaching in Belgium is much and deservedly extolled, as the colours produced are very pure and bright. The water in some of the rivers would appear to be admirably adapted, not only for steeping Flax, but also for bleaching both Linen yarn and cloth, and no doubt this circumstance helps to bring out the high colours for which the Belgian bleachers are so celebrated. There is a bleaching establishment worked by steam at Antwerp, and others in different parts of the country.

Comments at the International Exhibition of 1862

" There are comparatively few private exhibitors of Flax yarns and Linens from this country, the greater part of them being shown by the Belgian Government, and produced at the various Flemish Apprentice Schools throughout the country. The private exhibitors are the present owners of what were lately Apprentice Schools, some Linen Societies, and a number of private firms. The Yarns comprise heavy Flax and Tow sorts. Some of them are shown in various stages of preparation, and of various qualities and sizes. The Linens exhibited are of many kinds, and comprise sail-cloth, sackings, ducks, sheetings, shirtings, ticks, diapers, damasks, Ac., Ac., forming altogether a large and varied assortment. Both Flax and Hemp sail-cloth is shown. The Hemp goods look rather coarse, and are not of great merit; but the Flax canvas is made of well-spun yarn, of good colour, and firmly driven up. Some excellent four-yard wide canvas is shown. Many of the Linens are shown in the rough or loom state; and they are very carefully manufactured and very excellent cloth. Others are shown in the bleached and finished state, and are of high colour, tastefully done up, and of most superior quality. They are of various degrees of fineness, from common Jute and Tow sacking to very fine lawn or cambric. The diapers are strong, useful, and pretty goods. The damasks, in table Linens, and for bed and window curtains, di¬play extraordinary taste in design and finish. They are very lovely, of admirable quality, and some of them of particularly fine texture. In class No. 4, Belgium has also an admirable and large assortment of Flax and yarns. The Flax is exhibited in every stage of preparation, and from a common to the very finest quality. Some of the specimens are most beautifully dressed and made up, and of remarkably fine fibre. The yarns shown in both classes are of many sorts and qualities, Tow, Flax, and Hemp, but the greater proportion are in wet spun line. They are beautifully spun, and some of the specimens are of remarkable fineness, and equal, if they do not surpass, the finest examples of either the Leeds or Belfast mills. With such Flax and with such yarn, no wonder that Belgium makes so fine an appearance in Linens. The display in both these departments is of the very highest order, and worthy of the very greatest praise."