Between that year and 1805 the Linen manufacture had increased to a surprising degree. This branch of manufacture was at that time the most important trade of the country, and Silesia had then gained a great reputation in the world for the durability and general excellence of its Linens. He goes on to say " that they are as good, or of better quality in Ireland, is certain; but they at one time were not equally considerate in the bleaching part. The chemical process for bleaching, once introduced into that kingdom, was wisely done away; wliile the gentle process in Silesia has been invariably used. Their cloth is generally three or four months in bleaching, and the lyes made very mild and moderately used. Experience has shown the reputation Bilesian Linen has obtained in South and North America and the West Indies, but the Irish Linen must shortly command a preference to any other, as great care and attention is now paid to it. 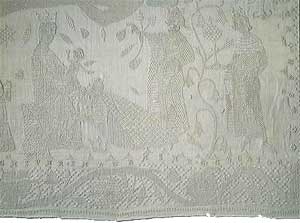 Linen from the convent of Altenberg, Germany 14th c. ( The Metropolitan Museum)

Silesia, Bohemia, Westphalia, Suabia, the Lausitz, and the countries belonging to the House of Brunswick, excel particularly in their Linen manufacture, the produce of which is exported to almost every part of the world. The greater part of the Sileaian Linen goes through Higher Saxony and Luneburg, to Hamburg. It is likewise conveyed down the Oder, and from thence by mean of canals which connect it with the Elbe. The Hamburg, merchants export it in great quantities to Spain, Portugal, England, and the United States of America. The striped and the checked sort of Silesian Linen, the stripes of which are formed of Turkey red yarn, are mostly exported to Italy on account of their fine quality, and are used for curtains, bed-ticks, &c. " The yarn of which the Silesian Linen is made is spun by means of the spindle, which makes it look like cotton, and re¬uires less time to bleach than any other. The Silesian Linen of different manufactures is all of the same quality, and there is no other distinction in it than in the width and length of the pieces. The merchants of Hamburg, who are in that line, go twice a year to Silesia to make purchases. Dutch and Italians also go there to buy, and even the English, who generally buy lawns, dowlas, checked, and book Linen. " In 1740 the export of Linen from Silesia amounted to only £500,000. In 1805 it was estimated at £3,000,000. In the Prussian part of Silesia in 1792-3 there were 24,761 looms, employing 38,451 workmen, making £1,470,000, of which was exported £1,040,000. The previous year the whole production of Sileaian Linen amounted to only £1,250,000, and the exportation to £810,000, of which about nine-tenths consisted of bleached Linens, the remainder being unbleached, bleached and unbleached yarn, thread, unbleached linen ticks, damasks, hand-kerchiefs, Ac. "To the value of the above exportation, made in 1791-2, is still to be added that of the following sorts:—Creas, Platillas, Bretagnes, Lawn, and the fine checked Linen. " The Silesian Linen trade is the most important in the German Empire. The chief places of its mannfactnre are Hirschberg, Landshut, Schmiedeburg, GreifFenburg, Waldenburg, and Schweidnitz. 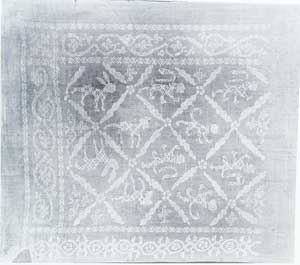 Hirschberg is the first and most important trading city in Silesia, and is the seat of the lawn manufacture. So early as 1786 the exports amounted to £254,000. The raw long lawns, or what are now called double Silesias, are frequently sent to Haarlem, to be bleached for England. The patterns of the coloured lawns are sometimes mixed with red, blue, and green flowers. Other descriptions of lawns are made for the Italian market, and also still a different sort called cobweb lawns, probably from the fineness of their texture. The other towns mentioned manufactured Linens more or less extensively, and some of them made fabrics peculiar to themselves, such as ticks, damasks, checks and stripes, Ac. " The manufacture of flowered damask and ticken had been brought to great perfection in Silesia and Lausitz. It was made in three different modes, plain, marbled, and white flowered, and consisted of table cloths, napkins, towels, Ac. The manuactures of Lausitz were chiefly exported to Cadiz, thence they were sent to the South American colonies of Spain. In 1795 the German manufacturers began to send goods to the United States, but the wars of this period frequently changed the nature of the trade, and caused great fluctuations in it" In 1840 the value of the Linen manufactured in Silesia was estimated at £1,230,000.

The principal localities of the Linen manufacture of Prussia at that period were in West Prussia; in Silesia, where it was, until near that date, all spun and woven by hand, the weavers living in small houses in the valleys between the mountains, but machinery for spinning had then been recently introduced; at Tecklenburg, and at Bielefeld in Westphalia; and in some other places in the Rhenish provinces which were famed for Linen of fine and white quality. The annual consumption of Linen in Prussia was then estimated at nine or ten ells, or between seven and eight English yards to each individual..

Bavaria grew about 15,000 or 20,000 tons of Flax annually, and she manufactured Linen for domestic use, which was ail spun and woven by hand, but exported little. Wiirtemburg, in addition to the home supply, made some Linens and damasks of an ordinary description for export. Thuringui made them chiefly for domestic use.

In Hesse-Cassel and Hesse-Darmstadt Linens were very generally manufactured. Saxony was once famed for Linen fabrics, both for home use and for export, but although the trade had declined in 1840, the goods produced there were still of deserved repute. The Hanse Towns, Lubeck, Hamburg, and Bremen each manufactured small quantities of canvas, but they have long been rather commercial than manufacturing cities.

In Hanover, Flax was a most important article, as the cultivation and manufacture of it gave employment to nearly one-half of the inhabitants. It was chiefly grown in the southern parts of the kingdom, and the quality was generally of a very good description, and well adapted for spinning. At the end of the seventeenth century, the Linen trade there was at its greatest height, but towards the middle of the eighthteenth century it fell off, as the Scotch and Irish Linens drove Hanoverian goods from the West Indies. During the American war it flourished again, but, in 1806, Napoleon's continental system nearly annihlated it. After the peace the trade again assumed a national importance, but it has never reached its former very prosperous condition. In 1843 the value of Linen and Linen yarn exported from Hanover was £300,000. Some Hemp was grown in Hanover, but it was not of very superior quality. The Osnabruck hempen Linen, known as Tecklenburgs, was bleached in the yarn, and it took a good colour. The quality of the Linen made in Hanover has considerably improved of late years, and as improvement progresses the trade may extend. MrPetrie, in his report, dated Hanover, July, 1863, says:— " The total value of the linen manufactures of Hanover (exclusive of the export of Flax and Hempen yarns), in so far as they appear in the returns for 1861, amounted to 1,748,060 dollars, about £262,212. Theireturns of the Linen industry of Hanover are only partial, as they record merely what is brought to the Government Linnen Leggen, which are offices where they are measured, stamped, and valued, for the purpose of facilitating their sale, but it is very likely that a cousiderable quantity is sold without passing through these marts. The returns for 1861 show an increase of 5624 pieces, measuring 612,553 ells of Linen cloth, value 98,310 dollars, upon 1860. The three previous years there had been a constant and considerable diminution. The chief seats of the Linen industry in Hanover, are Osnabruck, Hildesheim, Luueburg, and Hamburg, and the greater part of it is carried on by hand-loom weaving, and gives employment to the rural population during the winter. The produce was formerly bought up for export to North and South America and the West Indies, but they now find their way to other states of the Zolverein, where their excellent and durable qualities procure them a ready sale."