Christophe Philippe Oberkampf was the descendant of a long line of Lutheran dyers from Wurttemberg. He learned the trade with his father, a manufacturer of printed cotton in Aarau (Switzerland).

In 1756 Oberkampf began working as an engraver at the printing factory Koechlin- Schmaltzer et Cie in Mulhouse, France. When the company shut down in 1758, he moved to Paris. In 1762 he created a cotton printing factory with Antoine de Tavannes in Jouy-en-Josas, ten miles south of Paris. 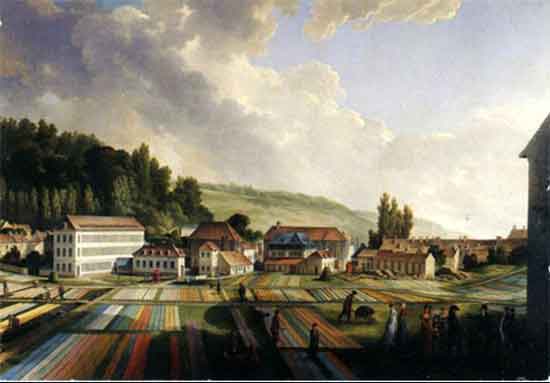 This venture soon became an international success and one of the biggest factories of the 18th century in France. Jouy was chosen due to the abundance of fresh water from the Bri?vre spring which was essential for printing. In the first ten years their fabrics were all hand done by wood block printing.

In the 1770's the factory began to incorporate copperplate printing and then later copper cylinder printing. These new techniques allowed for designs with a larger and finer repeat pattern although only in a single color. An important increase of production, and a lower cost of fabrication were the other important benefits of these technologies which were soon adopted in many other European textile factories.

The Jouy factory struggled through its first 10 years of operation but in the 1770's the toile of Jouy grew increasingly popular and with it, the company grew very successful. The factory was visited by the queen Marie Antoinette in 1781 and was deemed a ?royal factory." 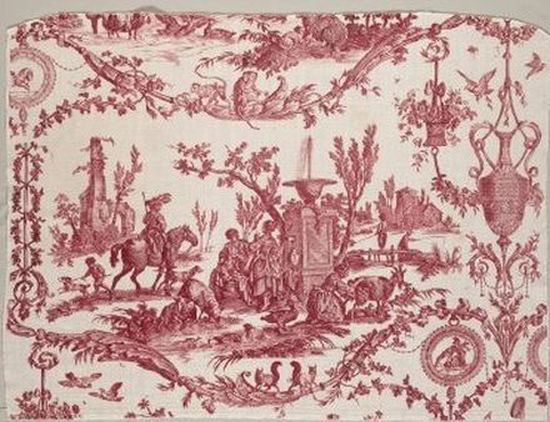 The Jouy manufacture remained a family story: Christophe Philippe Oberkampf worked with his brother Fr?d?ric, his nephews Widmer, his brother-in-law Petineau, and later his son-in-law Feray . 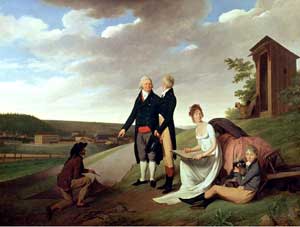 Oberkampf and his family portrayed in this painting by Louis Leopold Boilly in 1803. The Jouy en Josas factory can be seen in the background

Because of the French conflicts with England and the Continental Blockade (1809), the business climate turned from bad to worse until Napoleaon's defeat in 1815. The Jouy factory closed that same year.

During the years from 1783 to 1811 Oberkampf commissioned ?the French painter Jean Baptiste Huet to design the prints for his new fabrics. This collaboration was very fruitful and is one of the reasons for the huge success of what we now know as,Toile de Jouy.

Very often the theme of their designs was inspired by literary sources and told a visual story.? Each scene is described independently of the ?others and drawn in a bright color on a neutral ground which allows the spectator a sense of depth. The scenes are most often framed by natural elements. (see “Le Meunier, son fils et l’?ne”) Typically each of these scenes filled a surface of approximately one square meter, the size of the copper plate. 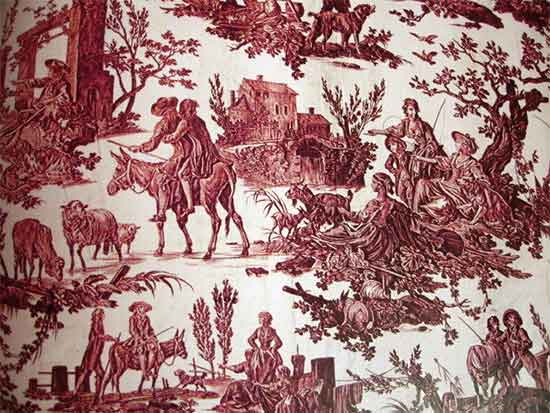 The Miller, his Son and the Donkey

The above scene was proposed to Oberkampf by J.B Huet in 1796. The images are inspired by the Jean de La Fontaine fable and were drawn after a design by Jean-Baptiste Oudry. 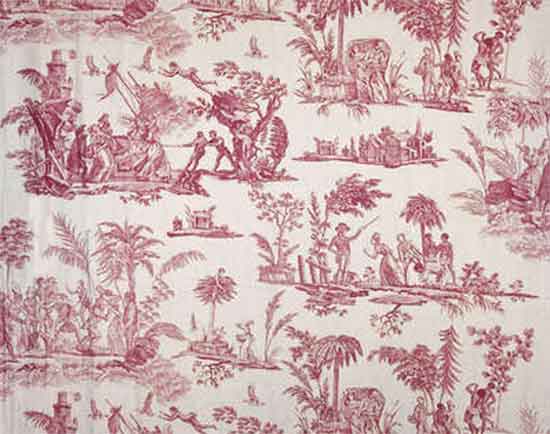 The design of this printed fabric was inspired by the novel Paul et Virginie by Jacques-Henri Bernardin de Saint-Pierre published in 1788. A re-edition of this work has been released by Pierre Frey, Paris.

In the 18th c. the fables of Jean de la Fontaine were extremely popular and many of the works created at that time by J.B. Huet were based on illustrations by Jean-Baptiste OUDRY of various de la Fontaine fables (1686-1755.) 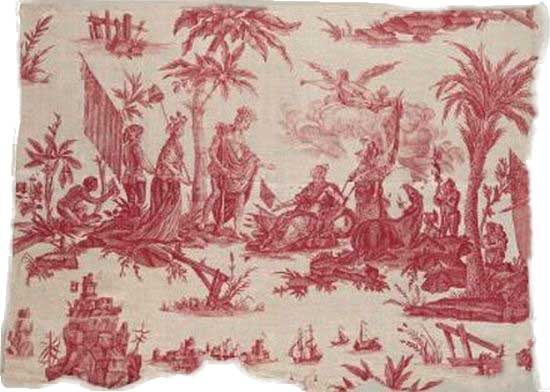 Hommage of America to France, Drawing D95, Circa 1778, attributed to J.B Huet.

Oberkampf often released fabrics with a design related to current events. The above toile refers to the Treaty of Alliance (1778). America alligns itself with France and the union is blessed by the goddess of freedom - a very symbolic theme only ten years before the French revolution! One can see on the far left a black man waving the human rights declaration as an English man is exiting.