Textile patterns consisting of stripes of varying widths and colors crossed at right angles against a solid background, each forming a distinctive design worn by the members of a Scottish clan. Tartan patterns are called "setts". The world tartan could come Either from old French "tiretaine" ( 13th century) or from the Irish world "tarsna . The Gaelic name for Tartan has always been "breachdan".

The exact origin of tartan is unknown and the subject is surrounded by a number of myths.
1538: James V of Scotland (1512-1542) purchased “Three elnis  of Heland Tertane”. Is tertane what we call tartan today?
1587: Hector MacLean (1572-1630), 5th Lord of Duart purchased 60 elnis of cloth white, black and green, the colors of the Maclean hunting tartan. 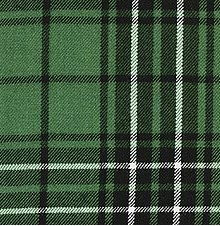 1745: Battle of Culloden. "The Highland attack on the Grenadier Company of Barrell's King's Own Royal Regiment" by David Morier; painted in 1746 for the Duke of Cumberland shows clearly Scottish soldiers wearing tartan kilts. 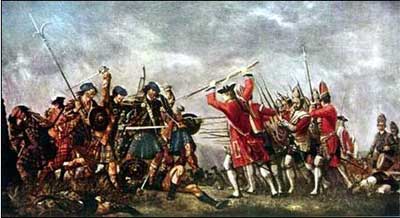