The botanical name of the flax plant is Linum usitatissimum. The English word, linen, is derived from the generic name, linum, and the term lint, from the old Scotch word, lin. Flax grows wild in Egypt, and is cultivated all over the world. Botanists claim that there are at least one hundred species of the plant, with flowers of various colors, some yellow, white, flesh-color, red, and blue. The plant of the Linum usitatissimun consists of a single stalk, growing from twenty to forty inches high, the average height about thirty inches; of a green color, with leaves alternating on the stalk; crowned with a beautiful blue flower of five petals sometimes called the fugitive flower, because the petals fall almost as soon as the blossom opens.

Plutarch writes that the reason the Egyptians used the flax plant, with the blue flower, for cloth, was because, "the universe itself is surrounded with the ethereal blue of the sky." As soon as the petals of the flower fall, the seed bolls are formed; in each section, two cells are formed, each boll containing ten shiny, dark brown seeds. The seed has a medicinal quality, being used for poultices and flax seed-tea; the outer coating contains a mucilaginous sub stance, which has properties that are soothing to inflamed membrane. The seeds are used for making linseed oil; first they are bruised, then heated, and sub¬jected to hydraulic pressure, when they yield from twenty to twenty-seven per cent oil. This oil is especially valuable for varnishes because of its drying properties. When the oil comes from the press, it is termed "raw oil," when subjected to heat, "boiled oil." The remains of the seed, after the oil is extracted, is made into a cake much used for fodder. When the flax is grown for seed, it is sown thinly, in order that the stalks may throw out a great many branches, and yield a large crop of seed. The fibre of the plant grown for seed is coarse and useless for fine materials. To produce a good crop of flax fibre, great care is taken in the selection of the seed, which should be of the previous year's growth. 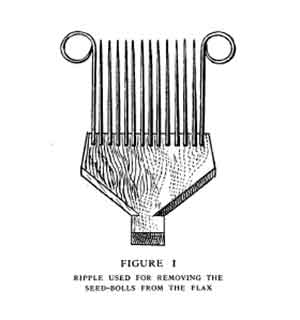 The best seed comes from Riga — it is a Dutch seed. The ground should be carefully prepared, dry, of sandy loam, with strong sub-soil the climate, temperate and moist. It is sown in the early spring — April or May, and reaped in August when the stalks have turned two-thirds yellow. Flax yields a better quality of fibre after a rotation of crops, such as grass, oats, potatoes, and wheat; the same ground should not be used but once in six or eight years. It is necessary to harvest the flax by hand; the stalks are tied carefully and stacked in the open fields. In Germany, where the seed is saved, it is taken from the stalks by drawing them through a coarse comb. Flax is cultivated in Russia, Germany, Switzer-land, Italy, Holland, Belgium, France, Ireland, England, Scotland, Greece, and America. Each stalk consists of a woody cylinder; outside of this and cemented to it, are the long, shiny fibres which are glued to an outer skin or bark. In order to separate these fibres from the outer skin or bark, the bark has to be retted or rotted away. 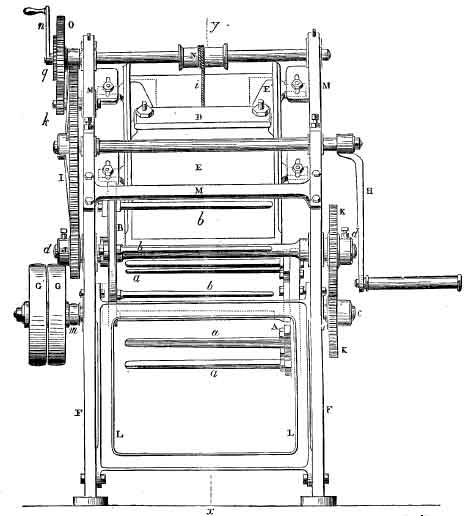 There are several ways of retting flax. One method is to place the bundles of flax, with their roots down, in ponds; it is covered with straw and boards, and kept in the water until decomposition has liberated the bark from the fibre. This process is slow, requiring from ten days to two weeks. It has to be carefully watched, or the fibre will become too brittle if allowed to remain in the water too long. In Belgium the straw is placed in crates and submerged in the sluggish running river Lys, at Courtrai. The flax retted in this manner is of the finest quality, owing largely to the properties of the water. In Russia another method is used, called dew-retting. The straw is placed in open fields on rather moist ground, where decomposition is accomplished by sun and rain. This form of retting takes a longer time. When the bundles are taken from the water, they are at first stooked in the open fields, then opened, and allowed to dry. When completely retted the outer bark falls away very readily In order to make the fibre perfectly free, the inner woody cylinder must be disposed of; the removal of this pith is accomplished by a process called scutching. The primitive method was to break the stalk with the hand, then beat out the pieces of wood. In Ireland, to-day, it is said this is accomplished by breaking over a back of a chair; of course, this is only for household uses. A primitive pattern of a breaking-machine is shown in the illustration. Later improvements have been made, where fluted rollers are used to crush the flax. Scutching mills are established in flax growing districts. The particles of wood are removed by being placed in upright posts and combed with wooden knives. As the flax is beaten, a certain amount of the fibre is whipped off, and is known in the Irish scutch mills as "codilla," a very cheap material used for coarse goods. Flax now becomes commercial, with the finishing of these processes, and is ready for the markets. It is characterized as a fibre, by its length, fineness, solidity, and suppleness — the length being especially valuable in spinning, as well as contributing to the durability of the textile. The color and quality varies, owing to the soil, climate, and process of retting used. It is sold usually in fourteen pound bundles, called in England a "stone," including one hundred pound lots, ranging in price from three to five shillings. The finest quality of flax brings often eight hundred dollars a ton, while the cheapest, only about one hundred dollars.

The flax is made exceedingly smooth by careful combings, when used and made into yarn in the household. For spinning, in early times, the distaff was used. The flax was fastened on loosely, in order that the fibres could be easily drawn out one fibre being joined to another by twisting and overlapping the ends; the end of the yarn was fastened to a spindle, usually weighted; as the thread gradually lengthened, the spindle spun round and round, falling to the ground. The illustration represents some Egyptian spindles in the British Museum. Wilkinson describes, them as follows: The spindles were generally small, being about three inches in length, and several have been found at Thebes, and are now preserved in the museums of Europe. They were generally of wood, and, in order to increase impetus in turning, the circular head was occasionally of gypsum or composition; some, however, were of a light plaited work, made of rushes, or palm leaves, stained various colors, and furnished with a loop of the same materials, for securing the twine after it was wound. (Chapter IX.) The spinner stood, holding the distaff in the right arm, and with the use of both hands pulled out the fibre, which was fastened upon the spindle, and gradually fell to the ground; when the spindle reached the ground, the thread was wound on the spindle and fastened, this operation was continued until the task was finished. At the discovery of the lake-dwellers, in Switzerland, in 1865, forty spindles were found which were at least three thousand years old. A gentleman traveling in a remote province of England, in 1865, f°und a woman spinning with a spindle made of a potato fastened to a stick. The spindle and distaff spread all over the world, but simple as they were, some tribes never made the discovery, and continued twist¬ing fibres, by rolling them between the palms and thighs. Among our ancestors, the seventh of January was called St. Distaff's Day, or Rock Day. This was because women resumed the rock or distaff on that Day, after the twelve days' celebration of Christmas. After such revelry as accompanied the Christmas festival, it would not do to begin work too vigorously. The women, however, seemed to be more conscientious than the men, who played pranks with the flax and tow, in return for which the maids poured water over the men. Even as late as the days of Burns, a social assemblage was called a rocking because the lasses each brought her spinning apparatus or rock."