The name damask is technically applied to certain classes of fabrics, richly decorated with figures of foliage, fruits, scrolls and other ornamental patterns, usually of a large and elaborate character.
The weaves usually employed are twills ( mostly satin) and the figures In the fabric are made by alternately exchanging warp for weft surface or vice versa.
The materials employed vary according to the purpose to which the fabrics are to be applied. In the manufacture of upholstery cloth for hangings and furniture covering, silk or worsted is used, while for tablecovers, towels, napkins, etc, linen is generally employed, except in the cheapest grades, when cotton is the material used.
The name was derived from the city of Damascus, when that city was a centre for the production of textile fabrics, and originally was applied only to silken fabrics, whose designs were very elaborately woven in colors and often with gold thread.
About the twelfth century the above-mentioned city, even then long celebrated for the production of its looms, so far outstripped all other places for beauty of design, that her silken textiles were in demand everywhere, and thus, as often happens, traders fastened the name of Damascen or Damask upon every silken fabric richly wrought and curiously designed, no matter whether it came or not from Damascus.
In order to explain the modus operandi for the production of damask in this country, suppose we place ourselves in the position of a public designer, whose specialty Is the designing of patterns for such fabrics. 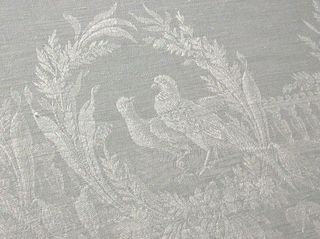 The first step in the operation is to prepare a dozen or more sketches, which are to be shown to manufacturers to take their choice.
This design or sketch is to be made into a damask tablecover, having 50 threads warp and 44 picks weft per inch, the figure of which is to be a 5-leaf 4—1 satin twill (warp face) and the ground a 5-leaf 1—i satin twill (weft face). 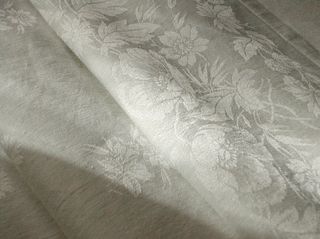 The next step to be taken Is to select the proper designing paper.the size of which that is, the number of rectangles, warp and wef in each large square, must be in the exact proportion to the number of threads (warp) and picks (weft) in one inch of the finished cloth. The mode of figuring is after the following manner:
Paper for warp ruled eight rectangles per large square; paper for weft ruled in the same ratio to eight as 44 is to 50.
Operation: x : 8 : : 44 : 50; there­fore 44x8 equals 352 divided by 50 equals 7.04, answer. 7.04 is near enough to call it 7; therefore, 8x7 is the proper size of design paper required. TIE-UP.
Then the tie-up must be considered, which in the present instance will be a 600-hook, with the tie-up as illustrated at Fig. 2 French system— point for border, and straight through for body, in six divisions.
The next process is to enlarge the de­sign as it appears in the sketch, so that one repeat will exactly fit on 600 rec­tangles (warp) of the designing paper selected.

After the design is transferred to the design paper, the next process is to paint in the weave, in the following manner, or as shown by a portion odt the design, taken from sketch .. 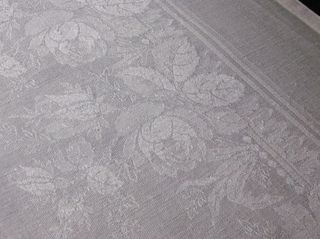 
Athough in the majority of damask faibrics nothing but satin twill weaves are employed (principally 5 and 8 har­ness), very good effects are sometimes obtained by combining other weaves with the satin twills. For instance, one side of a leaf may be painted In with a satin twill weave, and the other side may be a straight twill, thus giv­ing the leaf a shaded effect, which may be very pleasing.
Another method of shading and the one generally employed is to gradually change from warp-up to weft-up or vice versa. 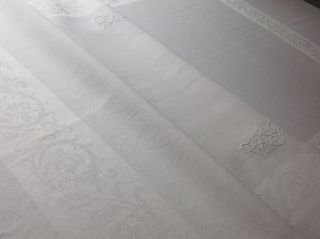 In damask there is probably a greater field for the production of large figures than in amy other class of weaving. There are two methods of weaving damask. First, by the use of the ordinary jacquard, which is discussed in the present article, and second, by the use of what iscaJled the compound pres­sure harness.
By the first method, although very elaborate figures can be woven and a fine oloth produced, yet by the second method a command isobtained over four or five times as many warp threads as by the first,thus allowingthe production of a fabric of much finer texture and even more elaborate ornamentation.
A description of damask weaving by the use of the compound pressure har­ness will be given later.
Where damasks are made all of one color, which is generally the case, as In white linen tableoovers, the effect is given by the threads lying at right angles to each other, and the light fall­ing upon them brings the pattern in bold relief and makes it easily visible.

As it is impossible in the scope at the present article Co describe the bleaching, dyeing and finishing of all the various damask fabrics, we can at least say this—that in the case of the linen tablecovers, towels, etc, all the finishing required is bleaching, starch­ing and pressing.
But a3 the beauty of the fabric large­ly depends upon its whiteness, it is es­sential that the bleaching of the cloth must be very carefully done. It is on of the excellence of her bleacheries that Ireland has been able to make Irish linen famous the world over.
Carding and Spinning Particulars.
Cotton damask is made in several grades and should be considered as be­ing made in mills equipped with ma­chinery for making medium and high-class goods. The grades of cotton used' for this class of cloth are middling to-good middling, the staple varying from l1/! to 1% inches strong, according to the grade of damask to be made.
THE MIXING should be as large as possible and, if good waste is used, i. e., sliver waste-from ttie front of the cards, and draw­ings, also sliver waste from sliver lap machines and combers, and cut roving waste from the slubber and fly frames, it should not be used in larger propor­tions than 1 to 3. In up-to-date mills and in fact most mills nowadays it is the general custom to have a waste machine into which the cut waste from the slubber and fly frames is picked. This is called
A WASTE MACHINE. This oiaclidne is construoted so as to take out all the twist in the roving and generally has for this purpose two or three porcupine beaters, and the cut roving waste is delivered in a fluff sheet, from which all the twist has been taken. The good sliver waste from the machines above mentioned Is mixed with the raw stock, while the cut roving waste, after being run through the waste 'machine, is fed -to a picker and made into a lap of the same weight as the laip being used at the finisher pick­er, for this class of goods, and then
THE WASTE LAP is run through with the raw stock lap at the finisher picker in tihe proportion. of three laps of raw stock to one of cut-waste, the cut waste being generally-put so that it will come in the centr* of the delivered lap.
The cotton, after being mixed, is put througb a hopper opener and either two or three processes of pickers, two> processes being best, the speed of beater being 1050 revolutions per min­ute for openers, 1,500 for breakers and 1,450 for finishers, also 1,450 revolution per minute for intermediate pickers, When used. This gives about 42 beat per inch at the finisher. The weight of laps should be 40 pounds at breaker, 37 pounds at intermediate and 36 pound at finisher.