Linen fabrics, were numerous in variety and widely different in their qualities, appearance and applications, ranging from heavy sail-cloth and rough sacking to the most delicate cambrics, Fabrics. lawns and scrims. The heavier manufactures include as a principal item sail-cloth, with canvas, tarpaulin, sacking and carpeting. In the UK the principal seats of the manufacture of these linens were Dundee, Arbroath, Forfar, Kirkcaldy, Aberdeen and Barnsley. 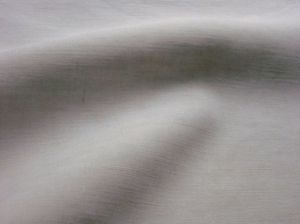 The medium weight linens, which were used for a great variety of purposes, such as tent-making, towelling, covers, outer garments for men, linings, upholstery work, etc, include duck, huckaback, crash, tick, dowlas, osnaburg, low sheetings and low brown linens. Plain bleached linens form a class by themselves, and include principally the materials for shirts and collars and for bed sheets. Under the head qf twilled linens are included drills, diapers and dimity for household use; and damasks for table linen, of which two kinds are distinguished single or five-leaf damask, and double or eight-leaf damask, the pattern being formedby the intersection of warp and weft yarns at intervals of five and eight threads of yarn respectively. 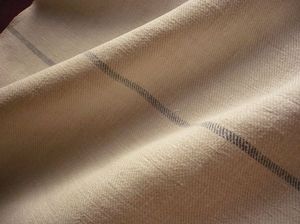 The fine linens are cambrics, lawns and handkerchiefs; and lastly, printed and dyed linen fabrics may be assigned to a special though not important class. In a general way it may be said regarding the British industry that the heavy linen trade centres in Dundee; medium goods are made in most linen manufacturing districts; damasks are chiefly produced in Belfast, Dunfermline and Perth; and the fine linen manufactures have their seat in Belfast and the north of Ireland. Leeds and Barnsley are the centres of the linen trade in England. Linen fabrics have several advantages over cotton, resulting principally from the microscopic structure and length of the flax fibre. The cloth is much, smoother and more lustrous than cotton cloth and, presenting a less " woolly " surface, it does not soil so readily, nor absorb and retain moisture so freely, as the more spongy cotton; 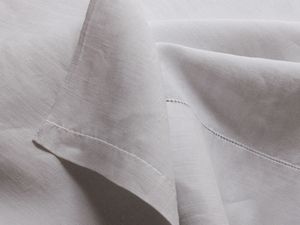 and it is at once a cool, clean and healthful material for bed-sheeting and clothing. Bleached linen, starched and dressed, possesses that unequalled purity, gloss and smoothness which make it alone the material suitable for shirt-fronts, collars and wristbands; and the gossamer delicacy, yet strength, of the thread it may be spun into fits it for the fine lace-making to which it is devoted. Flax is a slightly heavier material than cotton, while its strength is about double.