The most ancient mode of spinning is by the spindle and distaff, and this method is the simplest of all others. The spindle is nothing more than a piece of hard wood, made round, and sharp pointed at one end, so that it can be made to whirl upon its point in the same manner as a child's top: the upper part is reduced to a pin or peg, and it is this part which has the fibres united to it, the lower or enlarged part being only to give sufficient weight to make it revolve. The spinner must be seated upon the ground, and after having put the distaff in motion upon its point, by twirling it between the hands, get it up to a rapid motion by striking it occasionally with the hand, with a motion very similar to that by which a child keeps up the motion of his whipping-top, when he draws the lash of a whip round it.
The flax, after having been properly prepared, is lapped round the end of the distaff, which is nothing more than a stick that the spinner holds in his left hand, so as to be conveniently situated to draw off from it a few fibres at a time with the finger and thumb of the right hand, to form the thread. The upper part of the spindle, which is made smaller like a pin, has the ends of the fibres which are to form the thread attached to it before it is put in motion.
These fibres are drawn out of the bunch which is wound upon the distaff, and held between the finger and thumb, so as to be in the direction of the length of the spindle; therefore, when the spindle is once made to revolve, it twists these fibres together, to form a thread, and, as fast as the thread forms, the spinner draws off more flax from the distaff, and guides the fibres between the finger and thumb, so that they shall be regularly delivered out, and make an even thread.
The motion of the spindle is constantly kept up, by striking it as often as the hand can be spared from the operation of guiding the thread, When by these means as great a length of thread is formed as is convenient to reach from the end of it to the spindle, the thread, is wound upon the outside of the sihall part or pin of the spindle, for which purpose the spinner applies the fore-finger against the thread, close to the end of the spindle, and bends the thread at that . 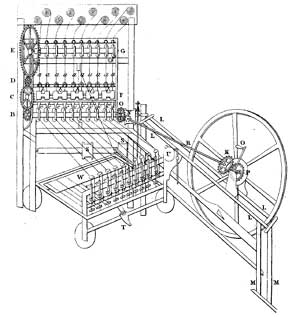 Fig. 1, represents an oblique view of the front of a frame containing ten spindles (but the frames may contain an indefinite number of spindles).

A The spindle or a bow passing through the whole frame, having ten bosses of brass or cast-iron thereon, each about four inches diameter, each boss supplying one spindle;

B, a pinion of twelve leaves upon the end of the spindle A, connected with the wheel C, of eighty teeth, fixed upon the end of a small iron spindle F, covered with wood, and extending through the whole frame; D, a slack or intermediate pinion of any size at dis-cretion, connected with another similar pinion, the latter connected with a wheel of 120 teeth, which is fixed upon an iron spindle G, of about an inch and a half in diameter, and extending through the whole frame ; but the wheels B, C, D, and E, may be varied in their numbers, to in-crease or diminish the draught of the substance operated upon, as may best suit its quality or the ideas of the workman. The pinion B is so contrived'as to slip off the end of the spindle A, to make room for a smaller or larger one; by means whereof a larger or shorter thread may be spun from the same sized rovings; a a a a a a a a a a represent ten roved slivers of hemp, flax, tow, or wool, passing between the iron spindle G and rollers in pairs pressed against them by springs or weights; these springs or weights must operate with sufficient force to hold back the slivers or rovings so securely, that they may only pass on with the movement of the spindle; these pairs of pressing rollers are placed behind the spindle. The use of the small iron spindle 1", covered with wood, and left rather larger than the spindle G, is, with pressure of the small wood-roller, made up in pairs bb bbb, and so contrived that each pair may roll upon two slivers, to bring them down straight, and preserve the twist which they receive in the roving-machine till the slivers leave them. The bosses on the spindle A, have likewise wooden rollers in pairs pressed against them by springs or weights, be¬tween which the drawn, lengthened, or extended slivers pass to the spindle, the rollers having each a tin conductor, c c c c c c c c c c, to bring the material under operation as centrically as possible between the wood-rollers and the bosses; but all the above-mentioned parts of the machine are so similar to the common upright frames, that a person conversant with them will not be at a loss to understand its arrangement. H, is a wheel of wood four feet in diameter, having its rim about two inches thick, with a groove in its periphery for a small cord or band. In its centre is a rule or stock of wood, through which the spindle I passes, and extends into its frame about one-fourth of its length. To enable the person that turns the winch to reach all the spindles at work, with the hand that is not engaged in turn¬ing, to remove any obstacle that may arise to the spindles, the arbor or spindle of the wheel I has its bearing on the sides of the frame that contains it, marked LLLL; this frame, with the wheel II, the arbor I, and the winch K, is similar to that part of a machine called a mule-jenny, used for spinning cotton ; this frame is supported in a horizontal position at the outer end by two legs marked M M, and a screw-pin which passes through K, the front upright a A, 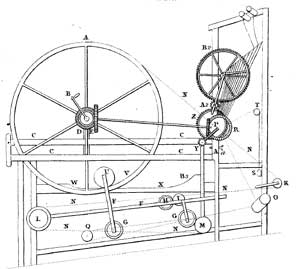 Fig. 2 exhibits a side view. A, the wheel mentioned above in fig. 1, and there marked II; B, the winch by which it is turned by hand ; C C C C, the frame wherein it works; U and E are blocks of wood on each side of the said frame to raise the wheel, so that the winch may be clear of the carriage F F, and apparatus G G; the two end wheels upon the carriage containing the spindles having two more corresponding on the opposite side thereof. H, a groove upon the end of a cylinder, which drives the spindles, and stretches through the carriage-frame, for'the diameter of which no certain rule can be laid down, as it depends upon the length or size of the yarn, taken into account with the other parts of the machinery. SNISNN, a small band passing over the wheels A K, II I L, and M, by which the groove-wheel H and its cylin¬der are moved, and the spindles driven. O, a treadle shaft, represented by S S, fig. 1, passing through the frame or part thereof at the option of the workman, connected with a tumbler at the end of the embossed spindle or arbor A, in fig. 1, by a small band, wound five or six times round each of them, and passing over the wood groove-wheel Q, and made fast to the back of the carriage F F; this tumbler, by the motion of A, is, at the return of the carriage, locked to the wheel R; and unlocked when the carriage is not in its proper situation. The carriage is drawn on by the weight of S fastened to a cord, which passes over the groove-wheel T, and is connected with the front of the carriage; U, the wheel on the arbor containing Jic holder shown in fig. 1; V, the cylindrical roller on a stirt fixed therein, and rolling at every return of the carriage on the plane W and X, which raises and falls the fallers and holders, so as to distribute the yarn upon the bobbins from the top to bottom ; the wheels Y Z, A 2,and B 2, are the same wheels shown by B, C, D, and E, in fig. 1 ; 1, 2, &c, spools containing the rovings. This machinery is calculated to save the heavy expense of currents of water, erecting spacious buildings, water- works, sleam engines, , and to spin hemp, flax, &c, at such an easy expense as to bring it within the reach of small manufactories. This machinery is also constructed upon such safe and simple principles, that no length of experience is necessary to enable even children to work it; and the use of water, steam, being rendered unnecessary, it occupies so little space, that it may be placed in small rooms, out-buildings, or other cheap places. To effect the above purpose, it was necessary to get rid of the lanier or flyer, upon the spindle used in the old machinery for spinning hemp and flax, which requires a power in proportion of five to one, and to surmount the difficulty that arose from the want of elasticity in these substances. This want of elasticity, in the substance to be operated upon, is compensated and provided for in this machinery; and upon this composition and provision, effected by the various means hereafter mentioned, the return of the carriage without any assistance from the work-person, and the traverse for distributing the yarn upon the bob¬bins or quills, lay the stress upon the patent. The most simple mode of compensating the want of elasticity, and which is recommended in preference to the other, is that of having a holder of large wire for every spindle, fixed in an arbor or shaft extending from one end of the carriage to the other.