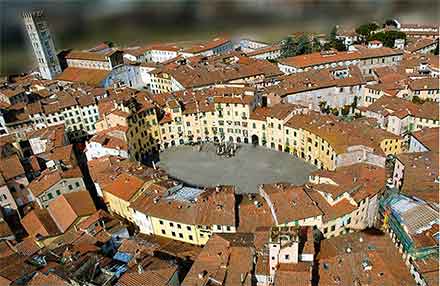 The city of Lucca became prosperous through its silk trade that began at the end of Middle Ages. During the 8th-10th c. Lucca was known for its merchants and luxury artisans. It was a center of Jewish life, led by the Kalonymos family that had kept alive commercial links with the Byzantine Empire and the Middle East. Lucca, having no direct access to the sea, forged an agreement with Genoa in the middle of the 12th c. which allowed its merchants to transport goods through the Genovese territory. In exchange, Genovese ships were to bring back to Italy the raw silk purchased by Lucca's merchants from the Levant. 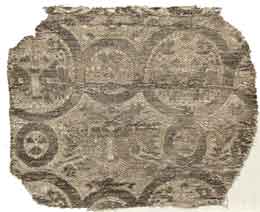 The growing luxury textile demand in Western Europe stimulated the economic development of Lucca. At the end of the 12th c. it became clear that it would be more advantageous to produce textiles locally than to depend on the production of the Middle East, or even Sicily, that had a declining production after the death of Manfred in 1266. The economic model of Lucca's silk production had a strong influence in Europe and thus the structure of the textile industry in Lyon and London was largely modeled upon what had been created in Lucca. The production of silk was in the hands of entrepreneurs, who were merchants. They bought silk fiber which was then transformed in small independent and specialized workshops. The artisans were restricted to working only for their supplier entrepreneur; in the 13th century, capitalist structures emerged that used similar partnerships. Human capital was precious, and the city's government tried to control its flow and to prevent skilled workers from leaving and settling elsewhere. Incentive measures such as tax exemptions and privileges were used to attract skilled workers.

summit fragment with a motif of birds, 13th c.

Lucca made notable improvements in the technology of silk-throwing devices and promoted the sericulture in the immediate countryside. 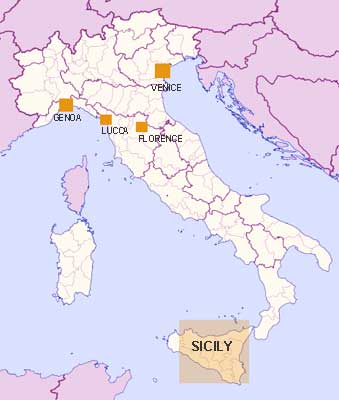 Commercial and textile production in Lucca is remarkably well documented. Commercial registers (Libro dei Mercanti) were established in 1371 and 89 firms were recorded. In the second half of the 14th c. there were about 3000 looms functioning in Lucca. Luxury textiles were sold throughout Europe often through the fairs in Champagne or Bruges. Lucca merchants had local branches (sometimes in partnership with other merchants); for instance the Rapondi company had branches in Bruges and Paris. 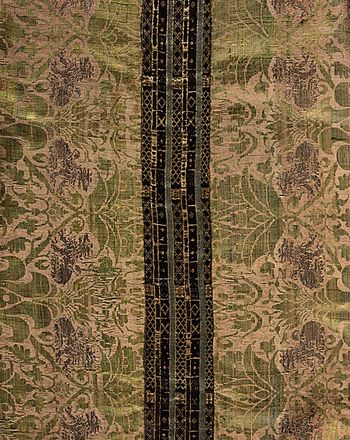 Lucca soon specialized in high quality silk fabrics such as drappi auroserici (fabrics made of a mixture of silk with gold or silver threads). The motifs used in their fabric design broadened from the 12th to the end of the 14th c., incorporating Muslim, Byzantine, even Chinese motifs. The styles continued to evolve, steadily losing their rigidity and becoming richer and more dynamic. Assymetry was introduced bringing with it a sense of movement. From 1375 a more specific Italian style that featured Italian flowers, vine leaves and naturalist themes apperead such as back-to-back animals, eagles, various birds and animals (fox, lions, wolves...), palmettes, romanesque scenes, hunting scenes, flowers, leaves, vine shoots.

The series of political disputes that began in Lucca in 1314 served as a prime impulse for the growth of the silk industry in Italy. For more than a century thereafter, a great many Lucchese artisans and entrepreneurs emigrated to the other cities of the peninsula that had already developed the silk craft, helping to strengthen those industries and introducing the organization and technical skills that had guaranteed the thirteenth-century predominance of Lucca in this field.

Donald King (d. 1998) former Keeper of Textiles in the Victoria and Albert Museum. King's knowledge of the technology and history of textiles of all periods across many lands remains unsurpassed.