There is a tradition that bobbin lace making wa brought to Binche in the fifteenth century by women who came from Ghent in the train of Mary of Burgundy, the daughter of Charles Le Téméraire, but this is al old wives' tale, and nothing is actually known of a lace industry at Binche before the end of the seventeenth century.

Binch lace strongly resembles fausse Valenciennes in it earliest phase, both as to texture and style of pattern the reseau varies, but fond de neige and a very ligf spidery mesh are often introduced, and there is no cordonnet at all or merely a single fine thread as a outlining to the pattern.    The oldest existing and modistinctly characteristic Binche lace is so fine and close in texture that its pattern is scarcely visible; seen at a little distance it has almost the appearance of a strip of cambric, and it must be carefully examined before the beauty of the fabric and the grace of the design can be fully realised.

The moderately fine type of Binche bobbin lace is much more effective and nearly as exquisite in quality. Binche was very fashionable in select Parisian circles during the middle years of the eighteenth century. A pair of cuffs of dentelle de Binche and two fichus trimmed with it are noted in the inventory of the Duchesse de Modene, the daughter of the Regent, in 1761, while in that of Mlle de Charollais, three years earlier, mention is made of a couvre-pieds of the same lace.

The production of true dentelle de Binche ceased altogether at the end of the eighteenth century, but in comparatively recent times point plat sprigs in the style of Brussels lace have been made in the town and district and sent to Paris where they are applied to machine-woven net.

Modern Binche lace made in 1910 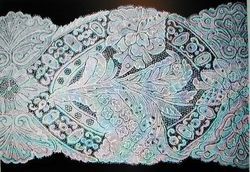