THE lace industry of Honiton is supposed to have been founded in the 16th C.. An early reference to lace-making is to be found in 1577 in Hellowes "Familiar Epistles of Sir Anthony of Gueuara," where he writes of seeing a woman " take her cushion for bone-lace or her rock to spinne." The Honiton bone-lace manufacture is already mentioned in 1620 by Westcott, and the often quoted inscription upon the tombstone of James Rodgein Honiton churchyard proves that the industry was well established in James I.'s reign. A survey taken in 1698 revealed that a quarter of the East Devon population were lace makers. 1,341 of them lived in the town of Honiton.

This was in the reign of William and Mary when Honiton lace was at its very best, but the quality of the thread has always been one of the weak points of English lace. No first-class flax thread has ever been spun in this country, and although that imported from Flanders into Devonshire was extremely costly it seems to have been inferior to that actually used for Flemish laces of the highest grade. The fine Honiton laces of the Brussels type disappeared in the first quarter of the eighteenth century, and from that date up to about 1800 the history of the industry is a blank.

This is the lace made in the 19th century that made Honiton famous: It was the favourite of Queen Victoria, whose wedding gown was made of Honiton. The queen was so impressed by the quality of the works that she commissioned a second piece as the christening robe of her eldest son, later to be king Edward VII. There is no proof of any lace making at Honiton as lace was made by individal workers who lived in the surrounding villages. The mos famous one were Branscombe, Axminster,Beer, Ottery St Mary, Seaton and Sidmouth..Each area developed a distinctive style. 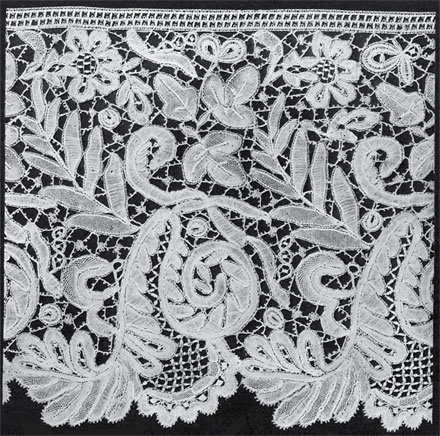 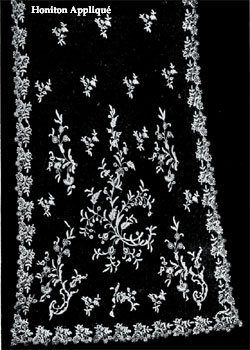 The History Of Honiton Lace Industry By H.J. Yallop

Old lace, a handbook for collectors by Margaret Jourdain