The oldest examples of this lace have patterns of tolerably graceful naturalistic sprays of flowers, worked on the pillow and applied to a net ground, at first bobbin-made, but afterwards machine-woven ; but very shortly after this imitation ground was adopted a marked deterioration in the patterns set in. Never superlatively good, they became debased to an extraordinary degree as time went on, until they were nothing more than a confusion of meaningless and indescribable blobs, known to their workers by such appropriate names as frying-pans, bullocks' hearts, turkey-tails, and the like, interspersed with objects resembling caterpillars at frequent intervals. 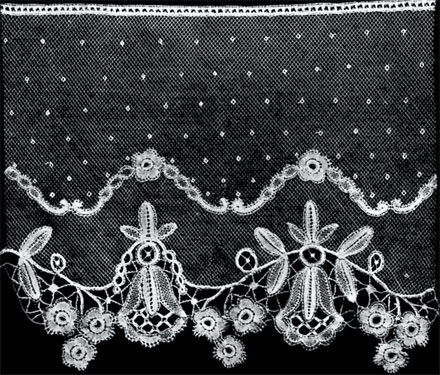 In 1845 or thereabouts the turkey-tails, frying-pans and the rest of the strange devices began to be made of a bobbin-made tape with brides, sometimes picots, connecting the sections of the pattern in lieu of the net foundation. These brides were generally made on the pillow, but occasionally were worked in with the needle. The best examples of this class of Honiton lace have certain portions, such as the petals of flowers, in relief and partly detached from the ground, a peculiarity which also distinguishes some of the earlier specimens of the Duchesse tape-lace of Brussels,. which indeed resembles that of Honiton in other respects.

The raised work is the distinguishing mark of Honiton. In no other English lace is it introduced, and the value of a piece is estimated according to the raised work in it. The lace obtains its name from the raised cord bordering parts of the design, this cord being unlike any other, as it is made on the pillow by the worker as she proceeds, and thereby serves a double purpose: enriching the lace and making the work easier.

The worker can by means of this cord proceed from one part of the design to another where she would otherwise be obliged to cut off the bobbins and restart. The Honiton pillows run rather smaller than the Buckinghamshire ones, and do not have the numberless starched coverings?only three pill cloths over the top, and another each side of the lace in progress; two pieces of horn called sliders go between to take the weight of the bobbins from dragging the stitches in progress ; a small square pin cushion is on one side, and stuck into the pillow, the " needlepin," a large sewing needle in a wooden handle used for picking up loops. The bobbins are of neatly turned boxwood, small and light. The trade of lace-making remained for several generations in some families .