PRIOR to 1665 nearly all Flanders laces were known under the name of Mechlin to the French commercial world. " The common people here," writes Regnard, who visited Flanders in 1681, "as throughout all Flanders, occupy themselves in making the white lace known as Malines." The laces of Ypres, Bruges, Dunkirk, and Courtrai passed under the name of Mechlin in Paris. A great deal of Malines was made in Antwerp, Mechlin, and Brussels. 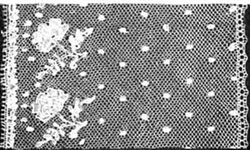 In England Mechlin is not mentioned by name until Queen Anne's reign. In 1699 the Act prohibiting foreign lace was repealed in so far as it touched the Spanish Low Countries, and Anne, while prohibiting lace made " in the dominions of the French King," admits the import of Flanders lace, so that from the first years of the eighteenth century Mechlin was without rival in England among light laces.
Mechlin laces are the most beautiful after Brussels lace and last longer. It was eminently suited to the less severe modern costume which came in with the eighteenth century, and by reason of its open a jours and transparent appearance was worn as a trimming lace. It thus remained in fashion through the eighteenth century, when references like " Mechlin the queen of lace, "Mechlin the finest lace of all, bear witness to a vogue in England . The disappearance of lace ruffles before 1780 from women's sleeves, and the disappearance of the cravat and men's ruffles, put an end to lace as a fashionable adjunct to dress. In 1834 there were but eight houses where it was fabricated. Unfortunately, also, for the prosperity of the industry, Mechlin is of all laces the easiest lo copy in machine-made lace. 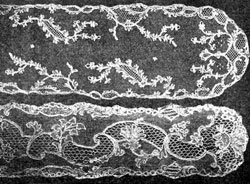 Historically,Mechlin developed,like Valenciennes,from the straight-edged laces of indefinite pattern, with an irregular ground which has the appearance of being pierced at intervals with round holes.
The earliest examples of what we can recognise as Mechlin show a design consisting of groupings of heavily drawn flowers, clumsily designed rococo devices, cornucopias etc..

Later, with the adoption of the characteristic Mechlin reseau, the floral design becomes more delicate and light, and a French influence is apparent . Much of this lace, worn in France during the Regency and later, was made up in the style of modern insertion, with an edging on both sides, campane or scalloped, and used for the gathered trimmings called "quilles," like the Argentan sleeve-trimming.

The attempt to imitate Alencon extended not only to the motifs of its design, the characteristic winding ribbon and scattered sprays of flowers, but to the buttonhole-stitched cordonnet. In Mechlin a coarse thread was applied to the edges of the design, which gives higher relief than the flat cordonnet. The fillings are often, like Alencon, of the trellis type. The late eighteenth-century Mechlin has pieces quite undis-tinguishable in design from Alencon of the Louis XVI. period, no doubt owing to its large consumption in France, as a "summer lace." The very characteristic pattern of a flower (sun-flower?) in full blossom, and with closing petals, is often met with in Mechlin laces of the end of the eighteenth century. This lace has a border with a very shallow scallop or slightly waved. The pattern of repeated sprigs of flowers, or of leaves, follows the edge. The remaining ground is covered with small square spots, minute quatrefoils, or leaflets. The flower is Flemish in treatment: while the semes upon the reseau show the French influence of the late eighteenth century . Design in Mechlin is in general floral in character. But a curious figured design is illustrated in Seguin's "La Dentelle" (plate xiv., fig. i), and characterised by him as "une niaserie enfantine." This piece, which dates from the last years of Louis XV., represents two men in a carriage driving a horse. The men wear three-cornered hats, long coats, ruffles ; two birds are flying in the air, and the group is separated from its repeat by an ill-drawn tree. A piece in the Victoria and Albert Museum,§ has a pattern of trees, buds, and scrolls, with cupids blowing horns and shooting at winged and burning hearts. A fragment of an altar cloth in the Gruuthus Museum : shows a medallion containing figures representing some scriptural scene. A similar piece, including several similar medallions, is in the Musee des Arts Decoratifs at Brussels (Plate LVI.). The ground and ornament of Mechlin, like Valenciennes, are made in one piece on the pillow, and many and various experimental fancy groundings were tried before adopting the hexagon-meshed reseau made of two threads twisted twice on four sides, and four threads plaited three times on the- two other sides producing a shorter plait and a smaller mesh than that of the Brussels reseau.
The early grounds are varieties of the " fond de neige," and the fond-chant or six-pointed star mesh is met with. A reseau of inter­laced double threads is also of frequent occurrence, and a reseau of four threads plaited to form a very large mesh having the effect of an enlarged fond-chant ground,
The most common form of ornamental filling is an arrangement of linked quatrefoils.
The toile is finer and less close in texture than Valenciennes, and appears to be now dense and cloudy, now thin and almost transparent, This unevenness of quality, together with the presence of the cordon-net which gives precision to the ornament, is responsible for the old name of ' broderie de Malines.