The needle-point lace made at Argentan is the only needle-point lace with a net ground besides Alencon which has ever been made in France. It is probable that factories at both places were established in the reign of Louis XIV. by Colbert, but its name does not appear in the ordinance.
Like that made at Alencon, the Argentan lace was at first called Point de France, and though lace-makers near Ligneres-la-Doucelle and in other villages worked for both establishments, there are many distinct characteristics in the two fabrics. The Argentan excelled in the brides, or bars. A speciality of Argentan is the bride picotee, a remnant probably of the Venetian teaching, for Italian workers were brought over to show the French lace-women the art of needle-point lace-making. This fact accounts for the Venetian character of the early designs and stitches. The bride picotee consists of a six-sided button-hole bar, fringed with a little row of three or four pearls on each side.

This bar is also called bride e'pingle'e, because pins were pricked on the pattern to show where the loops or boucles were to be made—hence another name, bride boucle'e. The art of making the bride bouclee was for a long time lost. An effort was made about 1830 to revive it, and an old worker was found who had made it in her girlhood. A distinctive feature in Argentan point is that the pattern is always larger and bolder than that worked in Point d'Alencon. The toile is flatter and more compact. The workmanship of Alencon is more minute and less effective, the reseau ground is finer. It is well to know the points of difference, as the two fabrics are often confounded. Both flourished during the reign of Louis XIV. 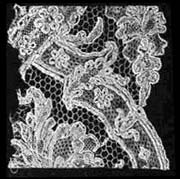 In 1708 the manufacture of Argentan had fallen into decay, when Sieur Guyard, a merchant of Paris, applied to the Council of the King for permission to re-establish the
manufacture, and to employ six hundred workwomen. He desired to place the Royal Arms over his door, and asked that his engraver and draughtsman, Montulay, should be exempt from all taxes except capitation. His request was granted. Guyard's descendants continued the work, but the famous draughtsman, Montulay, went over to a rival firm, with whom there was much quarrelling, both on this account and also because of the impartiality of the Dauphin, the King, Richelieu, and foreign royalties, in placing their orders with either firm. The number of lace-makers in Argentan and its environs at that time amounted to 1,200. Many names of gentlewomen of noble houses appear on the lists of the workers, indicating that the making of point lace was carried on by both rich and poor.

It was during the reigns of Louis XV. and Louis XVI. that Point d'Argentan was at its best. It became almost extinct at the time of the Revolution, through dispersion of the workers and failure in demand for the fabric. Since that time little attempt has been made to revive it. Embroidery is now made by the town workers, and the hand-spinning of hemp by the cottagers of the once-famous lace-making district now takes the place of the old industry.