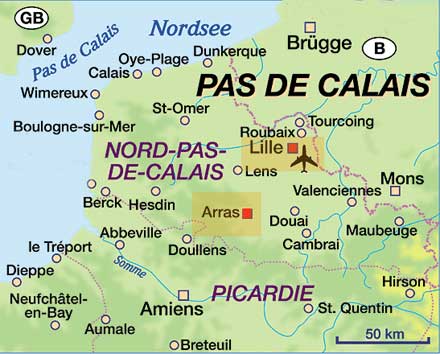 Arras was early distinguished for its gold lace, one English name for which, orris or orrice-lace, is said to be a corruption of the name of the town. An item in the accounts for the expenses of the Coronation of George I is 354 yards of Arras lace, which proves that it continued to be made into the eighteenth century. Under Colbert's scheme it is probable that thread -lace of the Flemish type was produced in Arras, but the kind that is best known under this name is strong, rather coarse and much like Lille, except that the straight edge almost invariably characteristic of the latter lace is replaced by a definitely scalloped one. Arras lace continued to be popular during the Empire, and its manufacture was carried on, although on a steadily dwindling scale, until about forty years ago