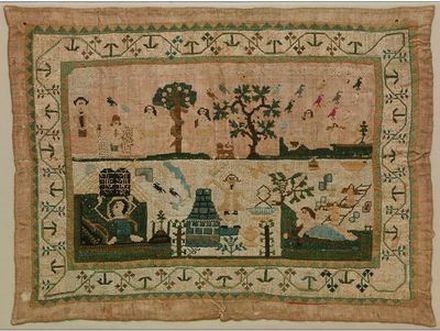 This rare object is one of a group of similar samplers showing scenes from the Bible that can be attributed to an as yet unidentified school that flourished in New York City in the eighteenth century. The earliest known sampler in this group is dated 1746, but the style, which features four to six biblical scenes within a wide floral border, persists into the Federal era. While there is some variation in the designs from sampler to sampler, virtually all of them show the figures of Adam and Eve and the apple tree with the serpent coiled around it. This scene can be found in the Museum's sampler in the upper left-hand area. The other easily identified scenes stitched by Sarah Lawrence are Moses holding the tablets containing the Ten Commandments (lower left), and Jacob's Ladder (lower right). It has been speculated that the biblical scenes were copied by the sampler-makers from scenes painted on the very popular Delft tiles used to decorate fireplaces in eighteenth-century New York. Sarah sewed her sampler completely in cross-stitch, and did not actually complete it; the upper band of scenes should have their backgrounds completely filled in like the scenes in the lower band.