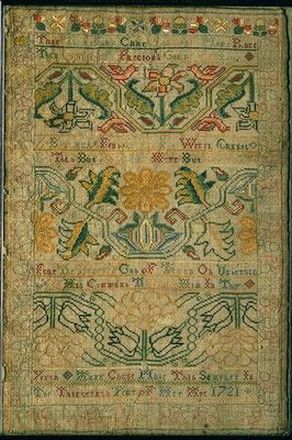 Embroidered sampler, 1721 Anne Chase (American, born 1709) Newport, Rhode Island Silk on wool; 12 1/4 x 8 1/4 in. (31.1 x 21 cm) Promised Gift of Ann and Philip Holzer, 2001 This delicate piece has taken pride of place as the earliest known sampler that can be attributed to Newport, an important colonial center. American samplers from the first half of the eighteenth century are exceedingly rare; this one is ornamented with floral motifs that still refer to the Baroque style of the previous century. Stitched with colorful silk threads on a wool ground, primarily on cross stitch, it features an acorn and carnation border, three wide floral bands, and a verse. Although unfinished, the piece is inscribed at the bottom: "Anne Chase Made This Sampler In/ The Thirteenth Year of Her Age 1721." Actually, the fact that it Is unfinished adds to the sampler's interest, since it teaches us about how sampler patterns were laid out, and the process by which the girls of Newport worked their samplers. It is not known why Anne never finished itâ€”the most likely reason is a young girl's frustration with the intricacies of such fine work. Anne married Timothy Folger (1706â€“1750) on December 5, 1733, and lived on Nantucket with him and their five children for the remainder of her life.