Sampler Definition : The word sampler dates from the 13th century. It comes from latin Exemplarium through French Essamplere which means 'an example to be followed.' This is piece of embroidery worked in various stitches to show skill, typically containing the alphabet and some mottoes.

The history of samplers in Europe extends probably from the end of the middle ages to the present time. In the early second millennium embroidery was a pastime for the nobility and samplers were rather a pattern example and teaching device. In England the earliest mention of a sampler is an entry of the account book of Elisabeth of York (1502). The earliest German sampler is of the year 1618. The earliest dated English sampler that survives could be the Jane Bostocke sampler dated 1598 (Victoria and Albert Museum London). The earliest forms of samplers in Europe were "spot samplers" and" band samplers". Band samplers are a lenght of fabric, mostly linen sometimes hemp or nettle, with bands of embroidery . The threads used for embroidery are often silk, metal or linen.

It took about twenty years after the new century came in before a real America style appeared.....

After the revolution American samplers develop a style of their own. They are very popular and original.... 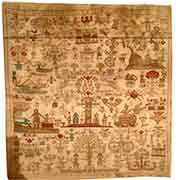 In the 16th and 17th most of German embroidery exercises were worked in a long narrow band....

How To Recognize Samplers

With the 18th century the style of the sampler changes. In shape the shorter and narrower type of the close of the 17th century prevails throughout the first quarter, but finds a rival in the plain square variety,..... 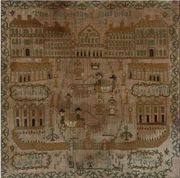 In spite of the huge number of samplers produced in the 19th century the design is much more stereotyped and the creativity far from the 18th century. ..... 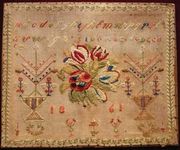 In France samplers are named " marquoir", "marquette" or "abecedaires."These were functional rather than creative past-times.... 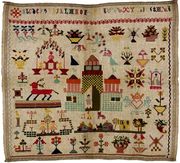