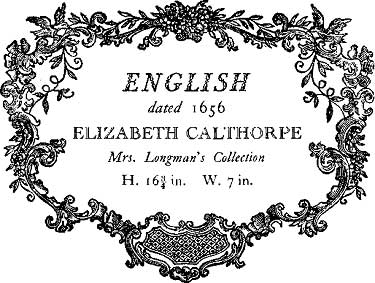 The history of the sampler in England extends roughly from the beginning of the 17th to the middle of the 19th century.

1502: "an elne of linnyn cloth for a sampler for the Quene, viijd" ( inventorie " of the household of Queen Elizabeth of York)

1530: Palsgrave Dictionay " Exampler: for a woman to work by exemple".

1552: King Edward VI had   "XII  samplars,  a  samplar of Normandie  canvas wrought  with green  and  black silk,  and  a  book of parchment  containing  diverse patternes."

1561: The medieval English guild of embroiderers was refounded as the Broderers' Company. ( Unfortunately the records of the company were destroyed in the great fire of London in 1666)

1577 :The first mention of cut-work is in the New Year's offerings to Queen Elizabeth in 1577-8, when Sir Philip Sidney presented her with a set of ruffs, and in the wardrobe accounts for 1584-5 mention is made of Italian cut-work.

1591: New and Singular Patternes and Workes of  Linnen"   An English translation by J. Wolfe and Edward White of the Vinciolo book, published in Paris in 1587.

The magnificent sampler above, worked by Susan Nebabri , contains a panel with Elizabeth's Royal Arms and the initials E.R. The design of this panel is markedly Tudor, and in addition the top two panels are worked in red and gold and black and silver thread respectively in a very distinctly Elizabethan style. ( late 16th c.)

An early drawn-work sampler by Anne Gower , who married Governor Endicott and sailed to America in 1628. As she worked this sampler while still unmarried, it must date before the year of that event.

The long banded sampler, most typical of all 17th-century samplers, had its greatest popularity in the middle of the century . The earliest dated example is of the year 1634 .

It is really with the 17th century that the history of samplers in England commences. In the first half of the 17th century the sampler's style is largely influenced by pattern books and Italy . The cut and drawn-work are of the ordinary 17th-century type ; the most common type is long and narrow in shape ( 6 to 7 inches large ) , decorated in regular bands of cut-work , drawn work and embroidery.

With the popularity of ruffs and other forms of lace adornment throughout the late 16th and the whole of the 17th century it is natural that cut- and drawn-work samplers should have been widely made.

The 17th century samplers were worked on linen; silk and metal threads were used for the embroidery. (see right) 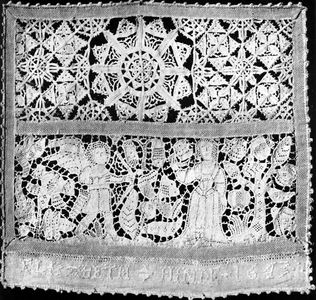 The essence of the decoration of cut- and drawn-work is geometric, but letters are found fairly often and also more elaborate patterns with figures. Dated samplers are rare of this class, and neither names   nor   inscriptions   are   frequent.      Examples   of   the   former occasionally   occur,   the   earliest   known    being    Elizabeth    Hinde's sampler ( image above) of the year 1643 . 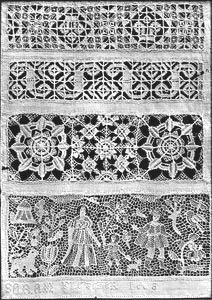 The majority of the extant samplers of this type belong to the middle of the century ; with the decline in popularity of the ruff, they cease to have their use, and it is rare to find an instance, as the Susannah Wilkinson's sampler (see image below), dated 1699-1700). 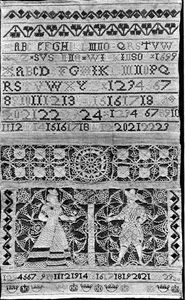 The colours used in the 17th-century sampler are paler in tone than those of the 18th century, and the variety of stitches employed is considerable, the commonest being the cross, short and back-stitch and for the lettering satin and eye-let. In addition petit-point, detached and padded work, are often used and metal-thread embroidery is widely employed, while pearls are occasionally found. Texts and verses are not common, but increase in popularity during the latter part of the century.

he bands of decoration are often regular in width and vary from one to three inches ; but where lettering is employed a narrower breadth is used, sometimes of as little as a quarter of an inch. The patterns on these samplers are mainly floral and geometrical. Pansies, roses, honeysuckle, carnations, lilies, strawberries and acorns are the most common flowers used, but the whole gamut of the Elizabethan needlewoman is run through and the raised and detached work found at the close of that period remain exceedingly popular. The extreme naturalism of the Elizabethan designs are lacking, however, and a formality, typical of James I's reign, persists in the earlier samplers, which later develops a marked angularity, especially noticeable in the second half of the century. A very strong current of Italian influence is found, particularly in the repeating border-patterns so common on these long samplers. Animals are used as motives of decoration, and small figures, holding upraised emblems, commence to appear early in the century. 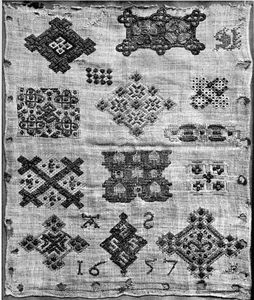 There remains the third group of the 17th century, which is shorter and narrower in shape than the long banded sampler and has the ground sown with devices of various kinds, more or less regularly dispersed over the sampler. These devices are for the most part geometric in character, but sprays of flowers, birds, animals, caterpillars, are frequently used, while small panels suitable for the embroidery of purses, cushions, etc., are often introduced. The colours used are very varied, and a great deal of metal thread and raised work is employed. A very common feature of the working of the geometric devices is that the pattern, which is often quadripartite, is left in various stages, only one quarter showing the completed design. There are only about twenty of this class of sampler known at present