Lev Samoilovich Rosenberg was born in a Jewish family in Belarus.After studying at the Academy of Art in Saint Petersburg he started a career as an illustrator. In 1890 he met Alexander Benois , a Russian painter and stage designer born in St Petersburg of French and Italian descent. Bakst traveled regularly to various countries into Europe and North Africa and studied in Paris with a number of notable artists including the French Orientalist painter Jean-Leon Gerome at the Academie Julian and, from 1893 to 1896, the Finish landscape painter Albert Adelfelt. He became internationally famous in 1910 after his design of the costumes of Schéhérazade , a Russian ballet by the Serge Diaghilev company. 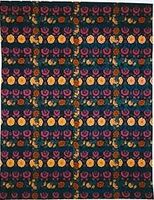