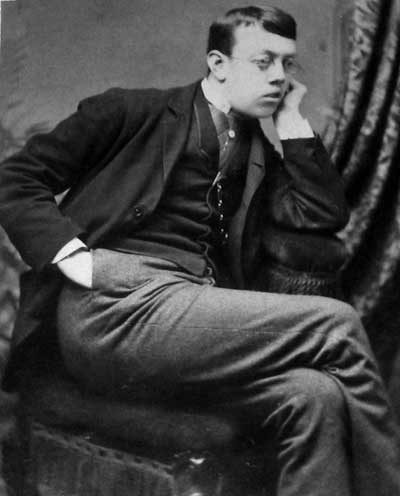 William James Neatby was born on the 24th May 1860 at Barnsley in Yorkshire. The eldest son of Samuel Mossforth and Mary Jackson Neatby.Trained as an architect, but his interests took him in a number of different directions. Neatbys work spans ceramic sculpture and tiles, metalwork, stained glass, furniture and painted murals. He was even known to have produced a number of wallpaper designs. The design shown here is one he produced for the company Jeffrey & Co in 1904 and was known as 'Lancaster Frieze'. The design is similar in style to the Glasgow School, which is not surprising as Jeffrey & Co were the leading producers of Art Nouveau style wallpapers in turn of the century Britain. The company commissioned design work from the likes of Walter Crane, Charles Francis Annesley Voysey, Allan Vigers, Lewis F Day, Edward William Godwin and of course William James Neatby. One of the main reasons that so many well known designers were willing to work for Jeffery & Co was the fact that the company were prepared to acknowledge the name of each individual designer of their wallpapers, something many other companies refused to do. The general feeling amongst wallpaper and textile companies was that the name of the company should be paramount and that putting forward individual names of designers would confuse the public and demote the name of the company. Liberty had many a battle with some of Britain's foremost designers, but the company always refused to budge on the issue of the naming of the designers of their products. They have exactly the same policy today. All of their designers are anonymous. Perhaps a more powerful reason, for the committed designer, were the efforts Jeffrey & Co took to keep the standard of the reproduced design work as accurate to the original as possible. The quality of the companies wallpaper printing work was considered some of the best in Britain. The company was the leader in its field because of the quality and integrity of their product and because of their commitment to the important role they felt that the designer held in the process. This in turn attracted the top designers from across Britain to become part of the success story that was Jeffrey & Co.